Hextall: keeping the core together next year

Here's the place for all matters puck. Be kind to your fellow posters, please.
Post Reply Previous topicNext topic
6 posts • Page 1 of 1

Hextall: keeping the core together next year

Not surprising at all. There will be some tweaks but it will be rinse and repeat next year.

Kind of surprised they are talking about extensions for Malkin and Letang. 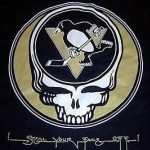 If those extensions are short-term and the beginning of some mild salary reduction as the careers of The Core as NHL superstars begin to draw to a close, then I'm okay with it. Hex has a reputation as a pretty patient builder of a roster, so JR style, blockbuster trades probably aren't in the offing anytime soon. It doesn't seem to be in his nature. He HAS shown a willingness to remove roadblocks in front of younger players so they can show their stuff, though, which is encouraging for players like Poulin, Legare, POJ, etc., as well as a guy like Zahorna who showed me a little something and is a bigger body. Jordy Bellerieve also brings some nasty. All assets that are in our system already. Clearing some dead weight in the F group for picks to get some younger players a shot, maybe on D to get a POJ into the mix, could help in acquiring some help in net for next season.

We won back to back cups with the help of a youth infusion from WBS, getting rid of somewhat stale (honestly, that's being a little generous), veteran depth at 3-5 mil a year per and replacing it with fresh, hungry players. Jake, Rusty, Sheary, Wilson (and can't forget Kuhnackl... hey, Rowney saw time in Cup Final games, too) weren't household names in the NHL or even Pittsburgh when they got the call. They came up and produced. The pattern that worries me is that Sullivan has become a little Bylsmish when it comes to playing young players significant minutes unless forced by injury. That's a disconnect with the way Hex did things at his previous stop, and also a disconnect from the way we have won at the highest level most recently.
Nothing left to do but smile, smile, smile...
Top

Not surprising at all. There will be some tweaks but it will be rinse and repeat next year.

Kind of surprised they are talking about extensions for Malkin and Letang.

I'm surprised, too. Malkin has become James Conner. Can't seem to stay on the ice. Letang is a shell of his former self.
Top

Dude, what? Did we watch the same Kris Letang this past year?

I'm on the fence regarding a Letang extension (I'd only do it for low price/short tem), but he was pretty dang good this past season.
Top

The Norris trophy nominations came out the other day and Letang should have been on that list. He might have had his best season as a Penguin this past year.

I'm on the fence about giving extensions until I see what 58/71 bring next year. If we see Letang playing at his current level then a 2 year extension is warranted. If Malkin is again hurt and he will miss camp then it becomes a hard decision.
One thing, Mario has made it known he wants both to be Pens for life.

Comparing Malkin to Conner is off base. Sure the injuries are frustrating but 71 is 100x the player JC ever could hope to be.

Part of me would like to see 58/71 move on so that they get a chance to lead a team. It would be cool to see both wearing the 'C' since both are deserving of such an honor.
Top

Yeah, there's a difference between a now maybe injury-prone (it's the NHL, though, sheesh) Conn Smythe-winning, three time Cup champ HOFer and possible franchise Mt. Rushmore face and James Conner. A big one. I've been critical of Malkin this season (and the last few were admittedly, now that we're done, mojo-baiting, as he always seemed to shine after I said something), but jeez. Played damn well against the Isles in Long John Silver mode, to boot. Sure, you wait to see how the injury unfolds before talking extension, but I'm fine with him riding off into the sunset with a Pens jersey on.
Nothing left to do but smile, smile, smile...
Top
Post Reply Previous topicNext topic
6 posts • Page 1 of 1